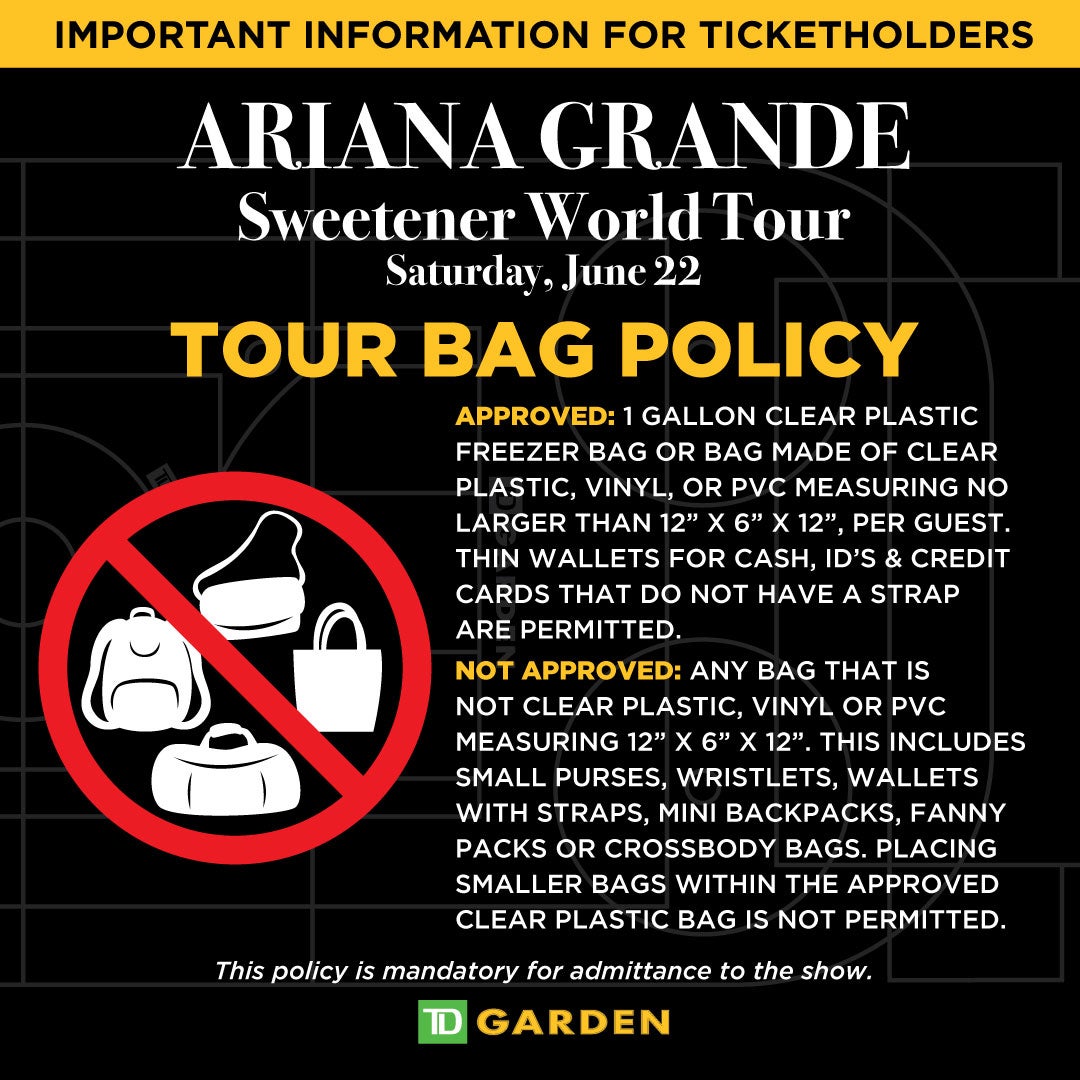 In order to provide the smoothest entry and safest experience for everyone in attendance, please read below:

Also, please note: NO cameras or Recording Devices are permitted. (Cell phones with cameras ARE permitted.)

The Sweetener Tour appreciates your help in creating the safest, most enjoyable experience for all of the fans attending this show.

Produced by Live Nation, The Sweetener World Tour kicks off March 18 in Albany, NY and will cross North America through June 26 in Toronto, ON. Previously revealed special guests Normani and Social House will also perform on each stop.

2018 marks yet another historic year for GRANDE. She concluded a banner twelve months with the distinction of being named Billboard’s “Woman of the Year” and receiving a pair of GRAMMY® Award nominations in the categories of “Best Pop Vocal Album” for her latest album Sweetener and “Best Pop Solo Performance” for “God Is A Woman.” Simultaneously, her recent single “thank u, next” bowed at #1 on the Billboard Hot 100 and smashed the record for “Most Spotify Streams for a Song By A Female Artist in a Single Week.”

TD Garden has a no bag policy. Large bags, backpacks, luggage, laptops, tablets, coolers, briefcases and like articles are strictly prohibited from the facility. Per request of the tour, fans attending the Ariana Grande concert on March 20, 2019 and June 22, 2019 should be made aware that this policy will extend to include purses, wristlets and handheld wallets as prohibited items. The tour will allow fans attending the Ariana Grande show on March 20, 2019 or June 22, 2019 who must bring personal items to bring one, gallon sized clear plastic freezer bag or bag made of clear plastic, vinyl, or PVC measuring no larger than 12” x 6” x 12 per ticketed guest. Tour branded and approved bags are available for purchase www.shop.arianagrande.com. Patrons with prohibited articles will be turned away at the entrances and no storage or check area will be provided for such items. Enforcement will be without exceptions.

ALL ITEMS brought into the arena are subject to inspection. The following list of items are not permitted in the arena and may be confiscated. Items that are confiscated will not be returned:

There is no storage available inside the building.